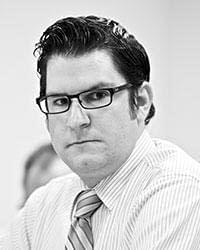 Mr. Banka is an associate attorney with Ravid and Associates and primarily limits his practice to brief writing in the trial/appellate courts of Michigan. He is a graduate of Central Michigan University where he was a Centralis Scholarship Recipient and a State of Michigan Competitive Scholarship Recipient. He received his Bachelor of Science Degree in International Relations. Mr. Banka then attended Wayne State University Law School were he achieved Honors Distinction in Legal Research and Writing and was a recipient of WSU Board of Governors’ Scholarship. Since 2001, Mr. Banka has been a member of the State Bar of Michigan and is also admitted to practice before the U.S. District Court, Eastern District of Michigan, and the Michigan Court of Appeals.